4 reasons your proposal lost you the work 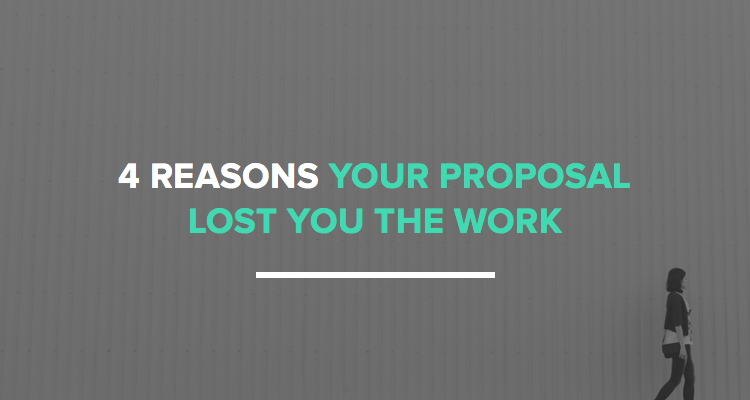 It's Friday night and you're feeling good. You ended the day by sending a proposal that you think is a solid lock. Come Monday you'll be looking at a new project worth an easy 5 figures and you deserve it after a number of phone calls with the prospect where you knocked things out of the park.

But that's not what you see in your inbox Monday. It rolls around and you see some variation of:

Thanks for submitting a proposal but we're going to keep looking.

They didn't even say their going with someone else, they're just not impressed by what you sent so they're going to take some time and look around for other people to send proposals in for the work.

Why did your proposal not wow them?

1. You didn't tie the price in to their value gained

So when you put in your proposal all of the pricing options you offered were well above the value that the client would get. You know you'd never spend $20k on something that was going to earn you $10k that would just be dumb and your prospect is not going to do it either.

Next time don't just waffle around on hard numbers. If your work saves them hiring a staff member then find out what the usual salary for that position is. If your work is going to let their sales team be more efficient and save 2 hours a week per member find out what the average sales are for those 2 hours. Multiply that by the number of sales people and the number of weeks and then you have the value of your work.

Simply tossing out a price without looking at value provided will either keep you in the poor house as you under charge or loose you work as you price things far above what the prospect can reasonably expect to recoup from the work.

2. You stopped at first level value

Okay so maybe you did talk about the first level value in the organization. You know that 10% more sales means the prospect will earn an extra $10k/month, but then you just stopped.

You should have talked more about what that $10k/month will let them do? Can they expand their sales team with that money thus make more sales again. Will that $10k/month mean they can purchase in bulk and then get better pricing thus increase their profit margin?

Don't just stop at the first level of value you provide to prospects. Dive deeper and show them all the possibilities that can be reached by working with you.

Did you spell check that proposal? Did you mix up their, there and they're? Or maybe even worse, did you copy and paste a chunk of the proposal from a previous client and forget to change the name? (Not a problem if you're using Nusii)

Very little makes you look as unprofessional and thus a high risk, as poor spelling. Well that's not true there is something worse, leaving the name of a previous client in the proposal.

Clearly if you can't do those things before the project then there are going to be lots of little things to clean up during the project and you're going to expect your client to do them all.

To put it simply, you're risky and going to make the client do work that should be yours. Why on earth would they choose you?

4. You focused on tactics not strategy

Finally, did your proposal include huge bullet points detailing all the tasks you're going to do? The thing is people that can approve projects are almost always strategic. They push the vision of the company and point the ship in the right direction. They have other people worry about the day to day tasks (tactical things) that need to get done.

When you send that proposal off to a strategic person and they see all tactics, they're simply going to dismiss your work. You're no longer a peer thinking about strategy, you're a subordinate thinking about tactics.

Maybe you are talking to someone that's focused on the tactics of the business. But tactical people really can only say no to work. Tactical people are typically far enough down in the company that they don't have the ability to approve a spend, all they can do is pass the proposal on to someone with a budget.

Focus on the value the company gets and not just first order value.

Either that person said no or they were never interested to begin with and your contact was on a fishing expedition. If just the right thing came along for just the right price they'd be willing to stick their neck up and try to get it approved. Otherwise they were just going to say thanks but no thanks.

Next time don't make these easy mistakes. Focus on the value the company gets and not just the first order value. Make sure you use spell check and grammar check and read through the whole thing a few times to ensure that it's not full of names from past clients. Finally, make sure you're sending it to someone that can approve the work and that you're talking to them in a way they can understand, strategically.

Do all those things and you're going to be writing proposals that win you work.

Previous How to Turn Your Current Customers into Bigger Clients
Next What Services are Best Offered on a Recurring Basis?
We donate 1% of all our gross revenue to the planet.
Copyright © 2013 - 2023 Nusii Proposal S.L.