The biggest mistake you can make when creating a proposal 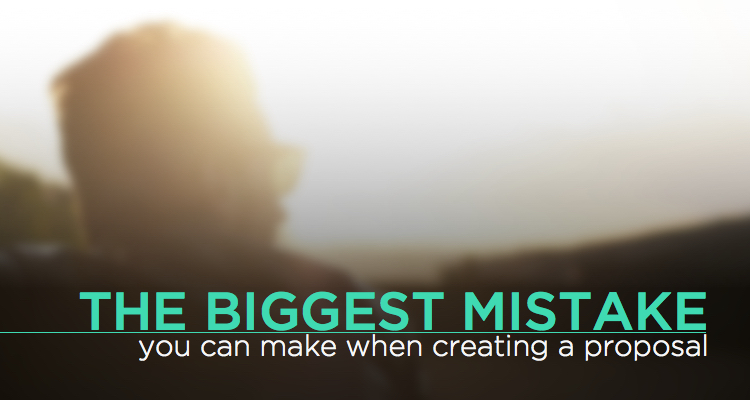 For years, I unknowingly handled proposals the wrong way. I made the same mistakes time and time again, and because I didn't know any better I just kept doing it. This lead to me working harder than I needed to, losing proposals that I should have won, and worst of all, scrambling to find more prospects because I wasn't closing the ones that I had.

Handling my proposals the wrong way was disastrous, and fixing the one mistake I was making changed everything.

My goal with this post is to share with you that mistake so you can avoid it in the future.

How I used to handle proposals

For years, this was my general proposal process:

I followed this method for years and it exhausted me. With every job I encountered I was spending countless hours trying to win the job by pitching my brilliant ideas and approaches for their projects.

Often these proposals went above and beyond to include mockups or concepts for their projects in the pitch as well.

I thought that showcasing my ideas and quality of work in proposals was the key to winning the job.

An average proposal could take anywhere from 10-30 hours depending on how much up front research and mockup time went into the project.

It was exhausting and my close rate was terrible…

To the naked eye, nothing looks terribly wrong with how I used to do proposals. This is just how I thought proposals were supposed to be done. Some of you may even see similarities with your own proposal process.

As a creative, I thought a proposal was a place to pitch ideas and impress the client.

Proposals are not a place to pitch your ideas.

Proposals are an agreement between you and the prospect on previously discussed scope and approach for the project, with a price tag.

It wasn't until I read Alan Weiss's famous book, Million Dollar Consulting that I discovered how wrong my approach really was.

Alan laid out the concept of looking at proposals as an agreement, and it changed everything.

How I handle proposals today

Today I am submitting proposals not just for my own freelance work, but for some of Gun.io’s top prospects as well. This new method allows me to handle more proposals in less time and close them at higher dollar amounts.

Notice the big difference between this and the first option. In this method, I am not pitching any ideas. I am simply using the proposal as a place to outline the discussions I have already had with the client about the scope of work.

When you pitch your ideas in a proposal you are inviting the prospect to question not just your proposal, but your ideas as well.

When you use a proposal to outline the previously agreed upon approach then your prospect is only questioning your budget. Everything else is already in alignment.

Understanding the prospect is more important than great ideas

Your ideas are part of your value, so don't give them away up front.

Instead, spend that early time with the prospect understanding their needs and building an emotional connection with them.

When you have an emotional connection with the client and they feel like you understand them and their objectives, then they won't question your ideas. When they believe you know what they are trying to accomplish, they will trust your expertise.

Previous How To: Interview your client and propose a value based price
Next Are you a freelance Introvert or Extrovert?
We donate 1% of all our gross revenue to the planet.
Copyright © 2013 - 2023 Nusii Proposal S.L.