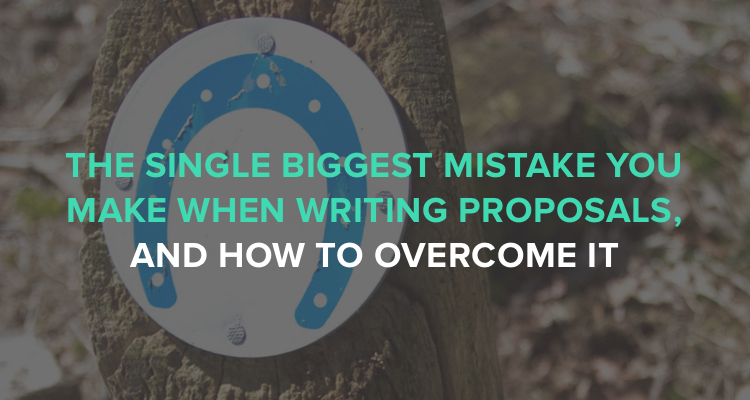 On the surface proposals seem pretty straight forward to write. All you have to do is send a few emails. Gather a few tasks that the prospect wants done, put a dollar value on those tasks and let the prospect know what that dollar value is.

This fantasy land ends with the client throwing money at you for that rushed proposal and you sitting back on your pile of money. It looks ridiculous when you read it here, but that’s what most consultants do. They put a mediocre effort into their proposals and then expect exponential results.

The biggest reason that you rush out your proposals without really digging in to what the prospect needs is that you’re scared. You’re scared that you’ll loose the prospect because someone else will come along and do the work.

Of course after that the regular business nightmare follows. There are no more clients, that was your last chance and you blew it by being to slow. Then your business tanks and you need to go back to slinging coffee or even worse back to that old boss you swore you’d never work for again.

Seeing it in writing it’s clearly an unbelievable scenario, but all businesses worry about this at some point.

When prospects ask for a proposal, never say you’ll send it over the phone.

The thing is, when you rush a proposal you miss so much. It’s likely that you’ve found out what only some of the value is to the client. Sure the new eCommerce site will yield more sales but you never had time to ask the questions that would let you learn about the other business initiatives that could finally get going with that extra cashflow. By missing discussions of the overall business strategy you're limiting your income.

Very little of a rushed proposal talks about the prospect and their issues. If you’ve rushed through the beginning of the prospect relationship then it’s likely you also don’t know how to connect the services you provide to the value the client will get from your services. By missing that vital connection you turn your services into a cost that in the prospects mind yields little value to their business.

Rushing to copy and paste

Rushing also generally yields a proposal that’s a great copy/paste job but has little real benefit to the prospect. Sure it’s done, but most of the proposal talks about you and your company. You do this because you never spent the time up front to let the prospect get to know you. With two pages you know need to convince that prospect that you’re the right firm for the job.

When you overcome your fear and spend time getting to know a prospect you get to cut all those qualifications out of the proposal. They already know and trust you. They know you can do the work, that’s why their talking to you.

Possibly worse is that the proposal includes the name of a past client which simply makes you look unprofessional. When that happens it’s clear to you prospect that you didn’t really put in the required effort for their proposal. If you couldn’t bother with a proposal, clearly you’re not going to be a good candidate for the actual work.

You need to have a proposal process. Get some standard questions to ask any prospect via email and never get on the phone or take a meeting with anyone until you’ve got answers to those questions.

When you get on the phone have a series of questions you need answered by the end of the call. If you couldn’t get all the buyers on the phone in the first call, refuse to have a second call unless you can talk to all the parties that make the buying decision. Doing anything less is a waste of your time.

When prospects ask for a proposal never say you’ll send it over the phone. Tell them you’ll get back to them and then start to write the proposal. If questions come up (and the almost always will) ask the prospect those questions. Only give your prospects a timeline on a proposal once you’ve got it done and only need to proof read it. You’re not ready to send it before.

By instituting a process for your proposals you eliminate being pressured in to sending a proposal. You simply tell the prospect that you’re not ready yet and after years of experience writing proposals you have a process to work through first so they can get a proposal that doesn’t waste anyone’s time. If your prospect gets annoyed, then they’ve simply shown themselves to not be your ideal client. Move on and find that next great client.

Previous How Studying Your Competition Could Lead to More Sales
Next How to Ask the Right Questions When Prospecting, So You Don’t Waste Time
We donate 1% of all our gross revenue to the planet.
Copyright © 2013 - 2023 Nusii Proposal S.L.