5 Things you need to discuss before writing a proposal 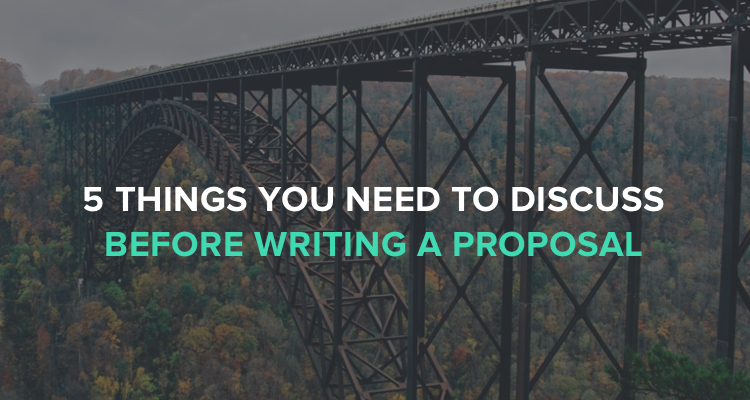 The single biggest mistake consultants make in writing proposals is rushing to get them to prospects. We rush because we all have a some deep seated fear that if we don’t get the prospect a proposal fast they’re going to find someone else and of course this is the last prospect we’ll see for a while.

That fear is a lie we tell ourselves and it causes us to skip so many questions we need answers to. You will get more prospects and you will land more work, so before you write your next proposal make sure you have these 5 questions answered.

1. Who’s accountable for the project?

Do you know who’s really accountable for the project? It’s quite possible that your direct contact is not actually responsible for the project, and that they’re just tasked with the tactical aspect of getting it done.

Identify the person truly responsible for the project by figuring out who could simply say ‘yes’ to the work and that it would go ahead. That is the person really in charge, the one that can knock down any roadblocks that come up from other parts of the company.

All everyone else can do is say no by deciding not to pass the proposal on to their boss.

You only send proposals to the person accountable for the project

2. Are there any other barriers?

Do you know what the potential barriers to your project are? For one web development project I had the work they wanted me to do on their ‘new’ system. All their current infrastructure and internal skills were built around the legacy code base. Our biggest blockers were the internal teams that felt threatened by a change to new technology, which brings us to the next question.

3. Who are the key influencers?

Who can derail the project? For me in the example above it was the technical lead of the legacy system. During a previous attempt at moving to a new technology he always brought up problems to the company owner which ended in the effort dying.

When I came in we identified this key influencer and got him on board right away. He came into the initial technical meetings as we planned direction and we discussed his issues and fears. Out of those discussions we came up with a training plan for the internal team so they could be fully up to speed and still relevant. This was a 5 figure add-on to the project which almost doubled the value.

4. What are our early victories?

Looking back at those key influencers, what early victories can you include them in to help solidify their part as champions of the project?

For my project it was a 2 day training session with some developers so all three of us could work on the new technology together. Where the last consultant had wanted to do it all themselves then hand-off, I sacrificed a bit of billable work in the building phase for a quick win and a project that moved forward.

5. Is there anything else I should be aware of before writing a proposal?

Finally you need to ask if there is anything else you need to be aware of. It may seem silly but this question may yield some surprising answers at times.

One of my prospects told me they were going on vacation in the middle of a project for 2 weeks. This was a crucial two weeks where I would need their feedback and dropping that time would mean not hitting the launch date. I decided not to take on the project since the prospect wasn’t willing to move the deadline or skip their vacation.

Without that single question about other things I would have missed this issue and likely been looking at a failed project.

Next time you think about writing a proposal stop and look back through these questions. If they’re not answered, it’s time to get back on the phone with your prospect and make sure you have answers to them. Without the answers you’re likely looking at a proposal that won’t win the work you want.

Previous How to Turn a Potential Prospect into a High Quality Lead
Next Best Practices for Improving Communication With a Prospect
We donate 1% of all our gross revenue to the planet.
Copyright © 2013 - 2022 Nusii Proposal S.L.