4 Things that aren’t the job of a proposal

If you want work, you need to write proposals, and for many people that is not a happy thought. They really want to dive in to their craft and knock out a great design or write elegant code. The proposal is simply a way to get to the execution of that craft.

Unfortunately along with this distaste for writing proposals comes a lack of understanding what the job of a good proposal is. This leads to many businesses making their proposals attempt to do many things they shouldn’t, which leads to a low close rate.

I get it, I was there at one point. I used to give out 20 page proposals to prospects with all sorts of information about my company, my qualifications…and many other things. My closing rate was low (like 20%) and it took me forever.

By cutting these 4 things out of my proposals I’ve been able to close almost every one I submit and get my proposals down to 2 - 3 pages.

1. Not simply a price quote

Your work is not a commodity and you shouldn’t present it like that. Treating your proposal like a simple price quote means that your prospect is going to treat your services like a commodity. They have no basis to evaluate your services except the price.

If all they have to judge is the price then it’s clearly in their best interest to find the lowest price and use that provider. You’re more than just a price for your services.

The second thing that way too many freelancer’s make the job of their proposal, is that they turn it in to a scope of work. This is a problem because it focuses the client on the deliverables instead of the value you provide.

You’re going to be able to earn higher rates by focusing your prospects on the value you provide to their organization. By focusing on deliverables you focus their thoughts on you being an organic task accomplishing robot.

The second issue with making your proposal function as a scope of work is that this also gives your prospect a big list of tasks they can take anywhere to shop around for a better price. When I used to make my proposals a scope of work I often had prospects come back to me with a lower number from some other provider, which they tried to use as a way to negotiate my pricing lower.

Instead of focusing on tasks accomplished, focus on the business value you provide for your prospect. 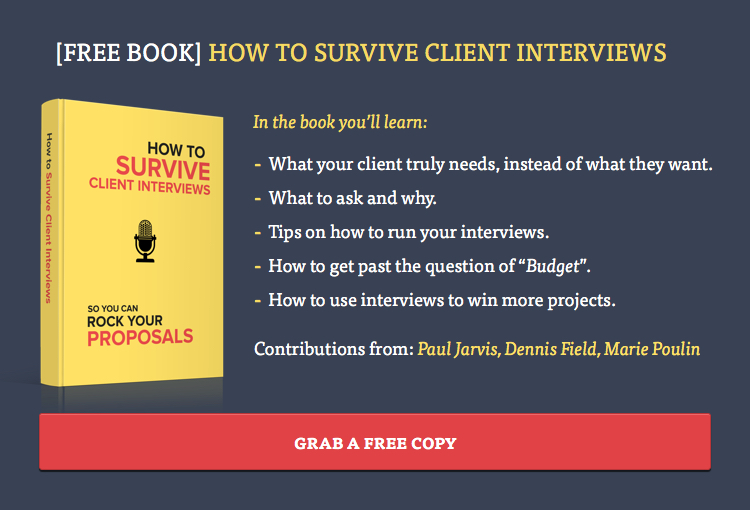 Far too many companies have a huge chunk of their proposal dedicated to either some long history or a huge list of employees that are going to work on the project. The worst proposals have both of these sections and while it may make the proposal look big, it does little to actually win the work.

The company history is all about you. How long you’ve been around. How you lead the industry in X. How the founder was awesome at X and was a visionary. There is nothing in there about the prospect, it’s all focused on how awesome you are.

A long list of employees is there to establish your ability to do the work. If the only way you can show that you’re capable of doing the work is by including a list of employees then you’re already starting on the wrong foot.

Long before you send in a proposal you should have established that your company is the best option for the work.

4. Not to show how smart you are

Ugh jargon, I hate it, you hate it and your client hates it. Your proposal is not the time to throw in all sorts of acronyms in an effort to show how current you are with all sorts of technology.

Most of the time your client doesn’t care at all about the specific technology you’re going to use. What they really care about is the value you bring to their business.

Instead of showing how smart you are, jargon is just going to confuse your client as they try to suss out the value in the proposal, between a bunch of words they only sort of understand.

After all of that, what is the job of a proposal? The only thing that is the job of your proposal, is to lead the buyer in to an agreement to work with you. Including any of the above items in your proposal simply makes it double (or triple) duty and decreases the likelihood of closing on the work.

If you really want to start writing great proposals that win work, it’s time to read through the Ultimate Guide to Proposals.

Previous How to Handle Unrealistic Client Requests: Learn How to Say No
Next 4 Ways to Use Rejection to Your Advantage
We donate 1% of all our gross revenue to the planet.
Copyright © 2013 - 2021 Nusii Proposal S.L.