4 Common Objections to your Proposals and How to Overcome them 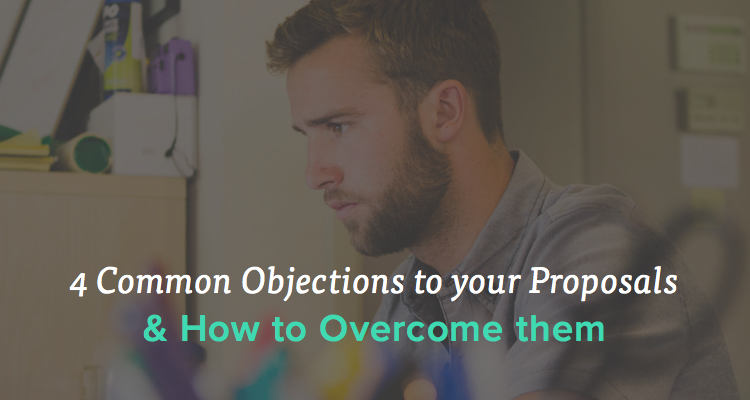 In early 2015 I spent a few hours on the phone with a prospect. We had a good time on the call, talking deep (at least I thought so) about their business with a bit of laughter thrown in. It was absolutely my ideal client call.

The result of our conversations was that I provided a proposal for work which they then decided not to go forward with.

I'm sure we've all had that experience and it's super frustrating. We've invested a bunch of time with a prospect and no sale has come out of it.

The thing is that before I even sent the proposal I should have made sure that the following objections were entirely dealt with by following my own hard earned advice.

First off when a prospect says there really isn't any money for the project what they're really actually saying is that they don't see the value in spending the money. When they look at the cost and the return they're going to make they don't see a 3X or 10X return on the investment.

If your prospect is saying there is no money, it's up to you to show how you provide value to the prospect's organization.

Secondly their saying that they don't view the project as a priority, so their available funds are going to go elsewhere. To combat this second reason, I ask all my prospects 2 questions in their initial email.

Asking these 2 simple questions engages prospects in a conversation about what's actually a priority for them and gives you a chance to turn that in to a project for your business.

The third major objection to proposals is that they actually don't have the need currently. If you've given the customer a proposal and then suddenly they have 'no need' you've got to ask yourself why have you been talking to them anyway?

It's your job to find out the needs in the prospects business. If you haven't been able to tease out needs then it's time to brush up your questioning techniques. Learn about these questioning methods to dive deeper with prospects and figure out their real needs.

Learning these questioning methods and applying them to your conversations with prospects will help you find the needs that they really have, so you can help them with solutions to those problems.

Really at the heart of the other 3 issues is trust. The prospects doesn't trust you with their money, their time, and they didn't trust you enough to really tell you what their needs were. They haven't been convinced of your credibility, integrity and quality.

Before you send anyone a proposal these trust issues should be locked up. Most of the time they aren't it's because business owners rush to the sale instead of taking the time required to really get to know the prospect and build a proper relationship with them.

For some prospects trust will be established in the first 5 minutes of a call. Some may take a few meetings, but if it takes months then the trust isn't going to happen. It's time to move on and invest your time in another lead that's actually going to convert in to a sale.

For my prospect it turns out that there were a bunch of other things they needed to deal with in their physical locations before they could add features to their website. I did a poor job of questioning them around their priorities and thus wasted time putting together a proposal on work that they may get to… sometime.

Don't be like me. Make sure you deal with the 4 objections above before you send a proposal. The proposal should only be a final signature on the dotted line for project approval. All of the objections should have been worked out before it gets sent.

Previous Should You Switch to Offering Niche Services or Stay Generalized
Next How to Handle Unrealistic Client Requests: Learn How to Say No
We donate 1% of all our gross revenue to the planet.
Copyright © 2013 - 2023 Nusii Proposal S.L.