The ultimate guide to proposals: What's a proposal? 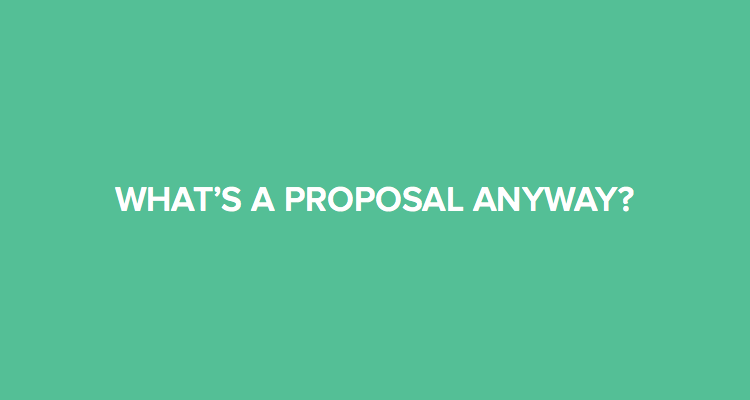 Let’s not beat around the bush. Nobody likes writing proposals. They eat away at billable time. They can be tedious, and a portfolio is all you need anyway, right?

An amateur designer can make do with the traditional “quote email”, the one that says, “That’ll be $3,500, please”. But a professional sets themselves apart. A professional woos their client with a project proposal.

If you don't know how to write a project proposal, or feel you need to up your game then welcome. This is part one of what promises to be an epic series: The ultimate guide to proposals. Over the next couple of months I'll help you win more proposals by sharing EVERYTHING I know about proposals. There will be interviews, great in-depth articles, free templates and homework too, if you want it. So get comfy and dig in to part one.

A proposal will set you apart. A proposal proves you take your business seriously. A proposal sets expectations, but most important of all, a proposal says you understand. You understand the needs of your client. Without understanding, clients won’t feel like you have a good sense of their project and you’ll never truly move up the design ladder. You’ll be a pixel hack. And nobody wants to be a hack.

I’ve been writing design proposals for the last 8 years. I’ve won most, but I’ve also lost a few. Throughout this series of articles I’ll show you how can write better, more convincing proposals. You’ll be able to give even the more experienced designers a run for their money.

So let’s get down to brass tacks…

A lot of freelancers think proposals are just for studios and agencies: the big boys. But it’s simply not true. Proposals sell your services in a way that quotes and simple emails could never dream of. The truth is, if you don’t know what a proposal can do for your business, you’re leaving a lot of potential clients out in the cold.

You could argue that a proposal in its most basic form is nothing more than a fancy quote, albeit a very detailed one. And I wouldn’t argue too much, except a quote gives a direct cost/service correlation and little else. A quote says nothing of your understanding of the client’s problem or the ways in which you can solve these problems. It should also be noted that quotes are only ever about the $ (not the value or solution). If the price tag is wrong, you’re out of the game and the client moves on.

If you reach for a quote template every time a new client approaches you, then you’re selling little more than a commodity. I don’t want to be a commodity and I don’t want you to be one either. You should strive to provide value, and value should be seen as such. As contrived as it may sound, you’re selling a better future to your client.

Proposals are about finding problems and presenting solutions

The problem might not always be evident, (even to the client) but by engaging your client and really listening, you can get to the root of a problem and offer a viable solution. Once a client can see the benefits of a solution, the cost becomes secondary.

To them, “Improve” might mean something as simple as money in the bank, less time in the office or just looking good in front of the boss. It’s up to you to find out what’s important to them and communicate that clearly. A great proposal does just that, making it the ultimate self-help tool.

To understand what a proposal can do for your business, it’s a good idea to look at a few common proposal misconceptions. Many people confuse the terms Proposal, RFP and Tender. If you need to get the proposal ball rolling you can download the free nusii proposal cheatsheet here.

To some the answer is obvious, to others not so much. In fact the definition can vary depending on the country you’re in. Let’s dive in and take a quick look at some of the definitions designers use when they talk about proposals.

RFP or Tender: A Request For Proposal or Tender (as they’re known in the U.K.) is quite often confused with the project proposal that you’ll be learning about over the coming weeks. It’s easy to understand this confusion, as both documents are seemingly identical.

An RFP or Tender can contain the same elements as a standard project proposal, such as:

So what's the difference between the two?

Essentially not an awful lot… but the difference is big enough to warrant an explanation.

An RFP or Tender is typically used by larger businesses to find service providers. The RFP outlines the client’s needs, requirements, budget, deliverables and sometimes even potential solutions. The requirements can be quite strict and therefore restrictive. It’s up to the service provider to answer the RFP as best they can.

You should be aware that any RFP you receive will also have made its way to multiple service providers. Like you, these competitors have also been hand picked by the soliciting business.

But where an RFP really differs from a typical project proposal is in the process. Applicants must follow strict guidelines if they hope to make it to the final selection. The problem is that you can’t really know what those internal guidelines are (until you’ve lost a few). Also an RFP can be a mere formality. Internal policy may dictate that the project be open to 10 competing service providers, while in fact they have no intention of working with anyone with a staff of less than 12, a turn over of less than $1.5 million and where someone's nephew works in accounting (I didn’t say that).

RFP’s are hard. There’s no personality involved and you can’t talk to the company like you would a “normal client”. It’s unlikely they’ll be available to sit down, talk things through and look for unforeseen problems. In short, it’s a whole different ball game.

Not all RFP’s are restrictive and evil

It’s possible to receive an RFP or Tender from a smaller company who’ve heard that an RFP is the done thing. The document will be formatted, as you’d expect, with the usual requirements. It may well be in the hands of several service providers as well, the difference is that they will listen to alternatives solutions. They want a bit of personality and they don’t expect you to work to a soul crushing, highly restrictive system. I know because one of my best clients came to me via an RFP.

While you can be lucky and find the exception to the RFP rule, you have to know they’re the exception. You don’t want to invest time and money in a proposal that is doomed from the start.

My advice; be wary of RFP’s.

**If you're looking for a way to get proposals out the door in less time and with less hassle, head over to nusii.com Proposal Software for creative businesses. **

You can find the rest of the articles in this series in one handy place: The Ultimate Guide to Proposals.

Previous The importance of setting goals and falling short
Next The ultimate guide to proposals: Why proposals fail
We donate 1% of all our gross revenue to the planet.
Copyright © 2013 - 2022 Nusii Proposal S.L.