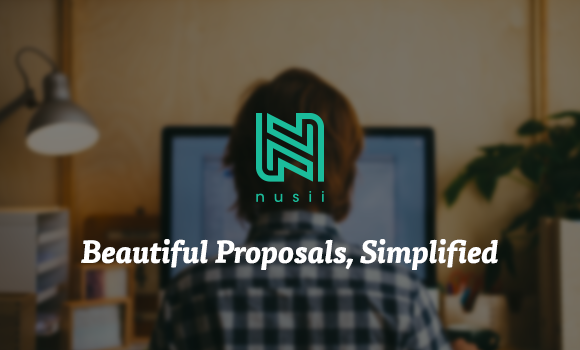 Today is a very special day for me. It’s day number 486 since I began work on what started out as a small side project. This side project launches today and is Nusii; Beautiful Proposals, Simplified.

Nusii is online proposal software for creative professionals. It’s built from the ground up to help professionals like you and I win back billable hours and close more deals, faster.

It started out as bit of a dream, something to call my own outside of client work. But today it becomes something else, it becomes a business in it’s own right. I’m no longer the only person involved, and in fact if it hadn’t been for some very special people Nusii wouldn’t be launching at all.

So, unlike the Oscars, and in no particular order here are some of the reasons (people) why Nusii is launching today and will allow us to rock proposals for years to come.

When Nusii began in early 2013 it was me, a budget of $2,500 and a freelance developer (thanks Tim). I never thought past MVP. I just wanted to simplify my proposal process, and that of a few fellow designers.

As soon as the MVP went live I knew that Nusii needed work, and a lot of it. I was out of budget and without a product I would really push. I was pretty down about it, but Nusii’s MVP did do one thing pretty well; it showed me there was a need for an alternative solution. My problem now was that I’d need to find a lot more money, either that or find a co-founder. This scared me for many reasons that I won’t go into now, but Joel Friedlaender of Cliniko said something that stuck:

It was about this time I took on a few months consulting at one of Madrid’s larger startups. Their veteran developer (no prizes here) began to take an interest in Nusii. After a couple of months working together, Michael approached me and asked if I was looking for a technical partner. It seemed like a solution had presented itself….

Financial arrangements aside, one of my biggest concerns about taking on a co-founder was their capability to do a consistently great job. I needed somebody as committed as I was. But I lucked out. In my not insignificant experience of working with developers I found Michael to be a rare gem. He could build out a design to spec and be extremely faithful to my original designs. There’s no doubt in my mind that Nusii wouldn’t be launching today if it weren’t for Michael’s commitment, expertise and ability to say, “Ye, we can do that”.

I came to know Marcus through Brennan Dunn’s Guild. We chatted a few times, he threw some consulting leads my way and we ended up working together on one of his own projects.

Marcus is one of those people who can take you at a low point and bring you smiling to the other side. He ended up becoming my personal business coach and eventual advisor to Nusii. Both Michael and myself couldn’t be happier about this.

Marcus is a planner, an ideas man and a damn lovely person. It would be impossible for him to chat with you and not give you at least a handful of inspiring ways to move your business or life forward. As my partner Nuria said:

“I like this Marcus, I can tell when you finish a meeting with him. You seem so much happier”.

My skills lie in Design and Usability. I enjoy writing the odd bit of copy but I’m not very good at it. I knew we’d need to get a pro involved if Nusii were to have a chance of surviving launch.

Philip has to be one of the most thorough, responsible and professional copywriter/content marketers that I know. He didn’t just sit down and write copy; he investigated the state of online proposals. He interviewed digital agencies (that was a real eye opener). He planned out every single aspect of what was needed to get Nusii off in the right direction. We even enjoyed the odd “long” or “short” form discussion. (We met in the middle). If it hadn’t been for Philip’s professionalism and continual support Nusii would now be something very different.

During Philip’s research interviews he spoke to some very helpful folks, we’d especially like to call out Kurt Elster of EtherCycle, Keith Perhac of Delfi-Net, Mark Valles of Infusion-4, Ben Stroinski of Satellite 6 and Kelly Weddell of Made by Upper Cut. Thank you all for taking the time to chat and for such valuable information.

As soon as Nusii was in a presentable state, (don’t forget it had already been an MVP) we called in the UX cavalry to test out our assumptions. Pro tip: You’re assumptions don’t usually mean squat when faced with users.

If you’ve never done any user testing, you’re missing out on some of the most valuable data you’ll gather, ever. After you’ve spent more than X number of hours working on a product it becomes impossible to see the forest for the trees. You lose the majority of your objectivity and you become way to close to the product to see how it actually works (instead of how you imagine it works).

The UX cavalry helped us find some fundamental flaws in our thinking. They saved us months of wasted time and potential revenue. So we’d like to say a special thank you to Matthew Lehner, Bruno Felicio and the lovely Geri Reid. Their generosity with time and expertise was overwhelming.

As a quick aside, we also did an open teardown on the Nusii website and got some great feedback, so thank you to all those who commented! Especially Jarrod Drysdale.

Richard became a champion for Nusii as soon as he heard the name, well maybe after he tried it. Richard is a freelance designer now based in the UK, but until recently also worked at the same Spanish startup as Michael. Richard became one of our most enthusiastic testers and supporters. He wrote his first proposal with Nusii and later went on to code up our beautiful Nusii landing page. Thanks for all your support Richard!

If there’s anyone who suffered Nusii related moans over the months then has to be Sean. Sean was one third of a Mastermind group of mine, and Nusii was fortnightly fodder. In fact while I was busy focusing on all the wrong things and trying to get every product under the sun out the door, it was Sean who told me to focus on Nusii. I was flailing to make a buck and desperately striking out at anything that moved. Sean is another strong link in the “it wouldn’t have happened” chain. Thank you Sean.

Joel is the brain behind Australian startup, Cliniko. I actually met Joel after losing out on a job with his startup back in 2013. We stayed in touch and it was through Joel’s advice that I realized I needed a co-founder. The conversations we had about how he started Cliniko were invaluable to me. It’s fantastic to have so many people in the product world who are so willing to share their experiences with others. I only hope to have half the success that Joel enjoys with Cliniko.

Maurice was Nusii’s first client way back when Nusii was a baby MVP. He stuck with it through all its failings, through its sticky UX and through several mini-disasters. Maurice was always happy to give feedback and any ideas for improvements. Incidentally, he’s still a client today. I think that says something about the value Nusii continues to provide.

I’m sure there are other people I could thank, but then I would fall into the realms of Oscar night. We’re so happy to finally have Nusii launched, it’s been an enormous effort. We can relax for about 2 seconds as all the real work begins, post launch. The journey begins here and we’d love to see you on the other side.

If you want to cut your proposal time in half and win back billable hours, try Nusii free for 14 days. Nusii; Beautiful proposals, Simplified.

Previous The ultimate guide to proposals: An interview with Nick Hance
Next Interview: Nusii – Beautiful Proposals, Simplified.
We donate 1% of all our gross revenue to the planet.
Copyright © 2013 - 2022 Nusii Proposal S.L.