Staying small and why we won't (always) build your feature. 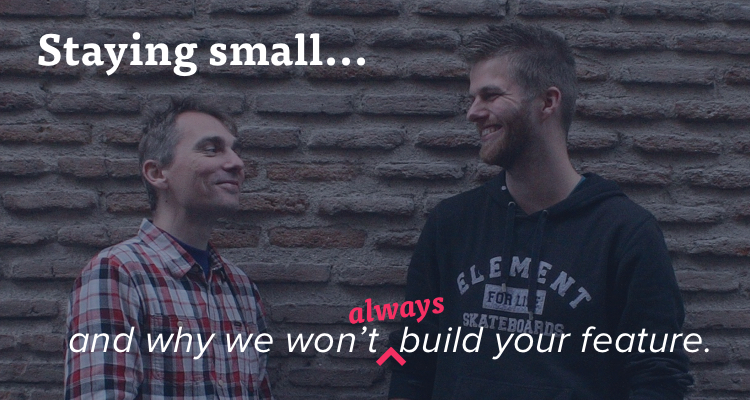 Let’s begin here; This has been a hard post to write, and as you read on I hope you can appreciate why…

We’re not a big company, we’re not a funded company and we don’t have a team of developers, designers, marketers and other general money spenders on payroll. We’re a company of two. We are funded by our customers and we intend to stay this way… Here’s why.

First, let’s do the introductions; I’m Nathan and I’m one half of Nusii. Michael, my co-founder came on board in the very early stages of development and helped Nusii to get where it is today. As for the rest of the team? (Cue the sound of crickets).

What? But you’re a big online SaaS. You make millions and have the power to sink battle ships! (None of the above is true, except for the obvious. We are indeed a SaaS).

The dream of big business and big bucks

In fact, we regularly receive emails from folks in the funding space who want to help Nusii get to the next level. But you know why we receive these emails? Because they presume we’re already making millions (again, we’re not) and that we have a team behind us. It seems that no matter how hard we try, we aren’t able to portray a small-guy-vibe .

The Five Pillars of Awesomeness

You see, from the beginning we had a clear idea of what we wanted Nusii to be;

Most importantly, it had to be ours. Neither of us wanted just another job or a boss that would keep us away from our families, our hobbies or have us stressing about whether we’d have to close down because ‘Steve The Investor’ was sick of such slow growth (we’d have to deal with that ourselves).

So let’s take a look at these Five Pillars of Awesomeness in more detail.

The second part of this is a given, if you can’t live on the money you’re making then you have a problem. Running a business while struggling to pay the bills is not a nice situation to be in. Fortunately for us we’re based in Spain and while it’s an appalling country to setup and run a business from (it truly is), it does allow us to live on a lot less than our US counterparts and still live well. This in itself removes a huge amount of stress.

So why stay small when everyone tells you to go big or go home?

We’ve always strived to remain true to our original vision for Nusii. And admittedly the more we grow, the harder it gets. Why? Let’s say an app does A,B, and C… but your customer wants it to do D, E and F. As a founder, if you don’t have a clear vision of what you want your business to be, you can very quickly end up in a place that you never intended to.

Think of it as stretching a piece of plastic sheeting in multiple directions over an indefinite period of time. Sooner or later it will weaken, and eventually break altogether. So to remain true to our vision and to keep the sheeting in tact, sometimes we have to say no. And we can only do that by being independent.

Of course over time ideas evolve, but our original ethos remains true:

Keep it simple. Nusii was never intended to be an all-in-one business solution. There are plenty of companies out there who are dealing with that already. No, we wanted to build a simple piece of software that responded to the following; "I’m a freelancer or run a small creative business and I hate writing proposals!". Simple as that!

You see, any piece of software can quickly become unusable when you start to slap on “it would be cool if…” features. Design and planning is an integral part of any software. And while tacking on a tiny feature may seem like something easy, it’s more than likely that it will come at the cost of usability in the future. More importantly, it might not benefit anyone other than the customer who requested it.

To put it bluntly, we aren’t looking to align our software with the vision of others, rather we’re looking for people whose vision of proposal software aligns with ours.

Of course, staying small does have one major drawback; We move more slowly than our funded brethren. The infamous motto, ‘ Move fast and brake things’ is awesome as long as you have a big enough team to fix what gets broken and like apologising to your customers on a regular basis. But we prefer to move more slowly and build something solid. It's a happy trade-off.

Incidentally, we’ve found over the years that our most loyal customers are also small, independent business owners, who want to support other small businesses. It’s always easier to relate to folks who are in a similar position to yourself, which is why we’ve always focused our attentions on… people like ourselves.

In Spanish there are two ways to address someone. You can use the Formal and Informal. Whenever someone (usually in the services industry) refers to me as Usted (formal), it makes me feel a little icky inside. I want to be treated as an equal and that’s how we want to treat our customers… as equals.

If you’ve spent any time on the Nusii website or are already a customer (thank you!) then you’ll know that we default to ‘ buddy language’. This doesn’t mean we’re trendy, beard-touting hippy types (at least I’m not anyway) but it does mean that we don’t see ourselves as a suit and tie business (no offence to those who are). In fact you’ll usually catch us working in our flip flops with babies crying, coffee mugs scattered about the place, cats and dogs running around and suegros scattered here and there. But that’s who we are.

Usually a business is Remote because it wants to work with the best people, regardless of location. If that means finding a designer on the other side of the world, then so be it. But as we’re an army of two, this isn’t an issue. We needed Nusii to be remote so we wouldn’t go insane and implode in a rather spectacular manner, disappearing from the inter-webs in the blink of an eye.

We value the fact that we can work from home, the coffee shop, the car or even from an airplane (Michael was so pumped after attending the Femto conference last year that he wrote and launched a feature whilst flying home). It’s this kind of freedom that allows enthusiasm and inspiration to continue to grow.

Something we could be proud to stand behind.

From the very beginning there were several SaaS businesses whom we held in high regard. The respect wasn’t always because of their kick-ass software, although it was usually the case, but more often than not for the way in which they ran their businesses and conducted themselves online.

You see, it’s relatively easy to build software, the hard part is knowing what kind of business you want to be.

In the beginning it was hard to think of ourselves as anything other than two freelancers who were a little our of their depth. But as time went by and as Nusii grew we began to see we had a real business. We wanted Nusii to be something that people could get behind. (If you haven’t seen our article about Facebook, check it out… We recently nuked Google Analytics too and have some exciting news to announce shortly).

We also feel strongly about the kind of businesses we serve. There’s enough pain in this world already, which is why we won’t knowingly allow any business that directly or indirectly contributes to the suffering of others use our platform. In fact it’s even reflected in our Terms and Conditions.

We’re not perfect and we make mistakes, but as Nusii continues to grow we’ll do our absolute best to cling to our Five Pillars of Awesomeness. After all, they’ve gotten us this far.

Michael and I hope you’ll stick around long enough to see just how far these five pillars can take our business and yours.

Previous Zapier and Nusii Integration is Live!
Next The future of work is remote-first, async and low-stress
We donate 1% of all our gross revenue to the planet.
Copyright © 2013 - 2023 Nusii Proposal S.L.